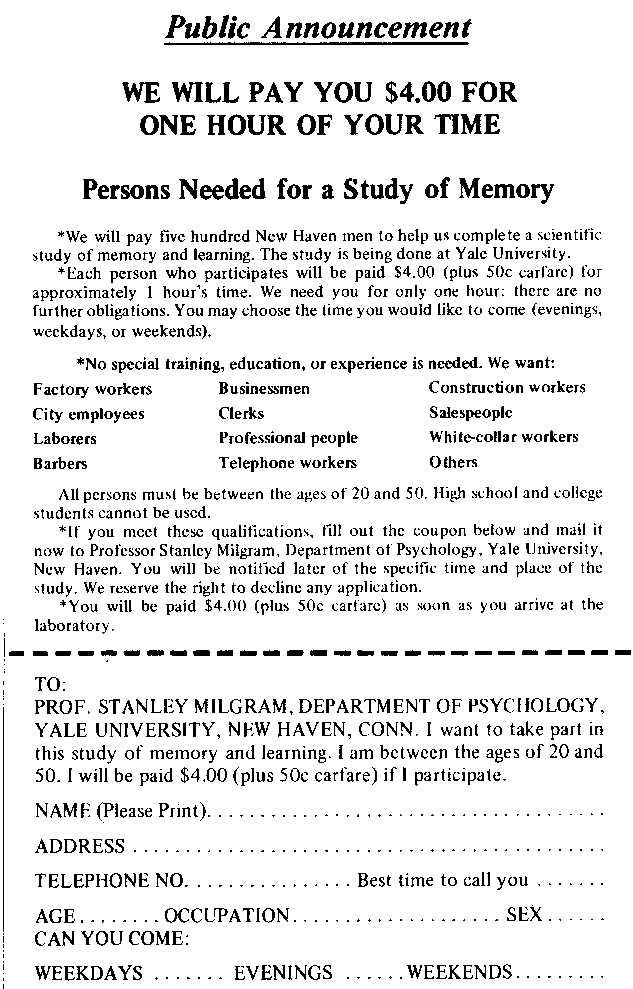 We’ve gazed the Observable Universe; we’ve melted metals with the heat of our bodies; we’ve painted with ferrofluids and Neodymium.

All of these are but a very miniscule sample of what science can be. They’re not, by far, all of what science entails. This said, we have to address science critically, philosophically, and with humanistic sensibilities.

Today we’ll talk about a very important topic in science: ethics. Science can open our minds; it can empower us to strive against chaos. But, unfortunately, this human endeavor has been used to commit atrocities.

Will it happen again? Could we avoid the perils of science without ethical considerations? These questions should be part of any scientific curriculum. And the study of recent history provides perspective on the topic.

The Milgram experiment on obedience to authority–done in 1961–was a series of experiments conducted at Yale University, by psychologist Stanley Milgram. This experiment was done a few months after the trial of a Nazi war criminal called Adolf Eichmann. The purpose of the experiment was to answer the following questions: “Could it be that Eichmann and his million accomplices in the Holocaust were just following orders? Could we call them all accomplices?”

The following video is an update to the experiment:

Milgram faced a lot of criticism because of his experiment. Many respected researchers believed that it was unethical.

What do you believe? Is it unethical? Does the experiment teaches us something about human nature? If so, what lessons would these be?

The following quote was taken from Milgram’s 1974 article, The Perils of Obedience. It addresses the results of the experiment; results that deal with the aforementioned questions:

The legal and philosophic aspects of obedience are of enormous importance, but they say very little about how most people behave in concrete situations. I set up a simple experiment at Yale University to test how much pain an ordinary citizen would inflict on another person simply because he was ordered to by an experimental scientist. Stark authority was pitted against the subjects’ [participants’] strongest moral imperatives against hurting others, and, with the subjects’ [participants’] ears ringing with the screams of the victims, authority won more often than not. The extreme willingness of adults to go to almost any lengths on the command of an authority constitutes the chief finding of the study and the fact most urgently demanding explanation.

Ordinary people, simply doing their jobs, and without any particular hostility on their part, can become agents in a terrible destructive process. Moreover, even when the destructive effects of their work become patently clear, and they are asked to carry out actions incompatible with fundamental standards of morality, relatively few people have the resources needed to resist authority

After watching and discussing the video, ask yourself the following question: What type of person are you: the one that goes all the way to the lethal shock, or the one who stops and questions authority?