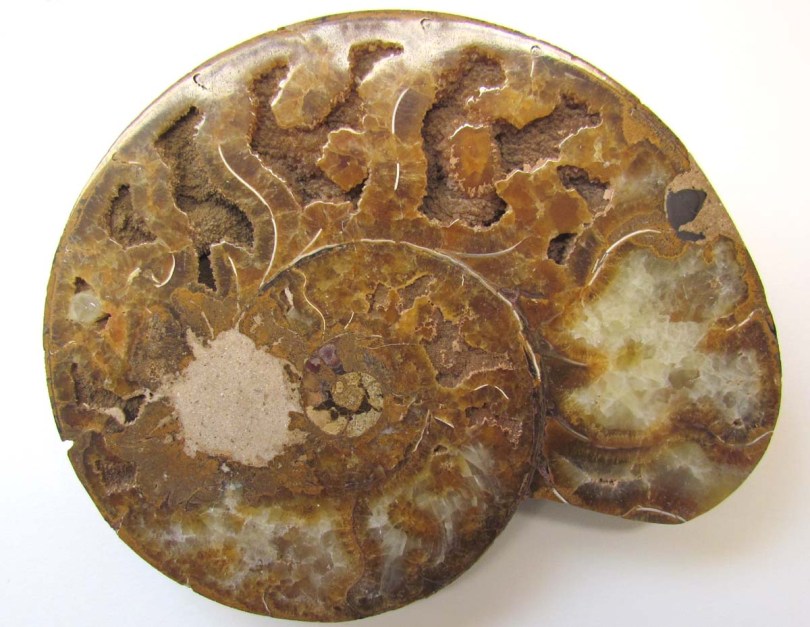 “Ammonites evolved 400 million years ago and survived for a long time only to become extinct 65.5 million years ago. Some ammonites were huge — fossils have been found that are more than six feet in diameter.”–Via The Agatelady.

Even when major religious institutions have come to–albeit rather cautiously–accept Natural Selection, there’s still a lot of debate. Much of it is irrational and vitriolic; ideological and tribal. The following videos and articles aim to clear some of the pseudoscientific detritus that have hampered its acceptance in Europe and, with a more rabid increase, in the United States. Denial and irrationality hinge on a total disregard for tools that time and time again have proven to be useful in the study of evolution; tools such as phylogenetic trees, radiometric dating, morphology of fossils, etc. Each and every one of these are vital to the understanding of evolution; thus, unsurprisingly, its detractors will deny their usefulness:

On the reliability of radiometric dating:

“Recent puzzling observations of tiny variations in nuclear decay rates have led some to question the science of using decay rates to determine the relative ages of rocks and organic materials. Scientists from the National Institute of Standards and Technology (NIST), working with researchers from Purdue University, the University of Tennessee, Oak Ridge National Laboratory and Wabash College, tested the hypothesis that solar radiation might affect the rate at which radioactive elements decay and found no detectable effect.”–Via Radiometric Dating Still Reliable (Again), Research Shows.

On Fossils and their dating:

“An excavation of a seaside cave in South Africa revealed two objects that were clearly manmade—pieces of ocher stone etched with a crisscross pattern. Neither the stones nor the rock in which they were buried were volcanic in origin, though, so the researchers chose another method for determining their age: thermoluminescence.

As in argon-argon dating, the thermoluminescence clock also begins with the last time that a rock was heated to a high temperature. The extreme heat eliminates electrons stored in certain crystals—such as quartz and feldspar—within the rock. Over time, the crystals trap electrons produced by trace amounts of radioactive atoms found in the environment. By reheating the rock, scientists can release the stored energy, which is given off as light and called “thermoluminescence.” The intensity of the light indicates how long it has been since the rock was last heated.”–Via Showing Their Age

On Ancient Aliens and pseudoscience:

“Ancient Aliens is some of the most noxious sludge in television’s bottomless chum bucket. Actual experts are brought in to deliver sound bites that are twisted and taken out of context while fanatics are given free reign. Fiction is presented as fact, and real scientific research is so grossly misrepresented that I can only conclude that the program is actively lying to viewers. To present the show as a documentary, on a non-fiction network, is a loathsome move by the History Channel spinoff. (Technically, Ancient Aliens airs on an offshoot of the History Channel called H2.) If the network and the show’s creators want to presentAncient Aliens as a light survey of fringe ideas and make it clear that the ideas aren’t meant to be taken seriously, I can’t quarrel with that. But Ancient Aliens and shows like it winnow away at actual scientific understanding by promoting absolute dreck. Ancient Aliens is worse than bad television. The program shows a sheer contempt for science and what we really know about nature.”–Via The Idiocy, Lies and Fabrications of Ancient Aliens.

45 thoughts on “Understanding Evolution, its evidences and mechanisms.”