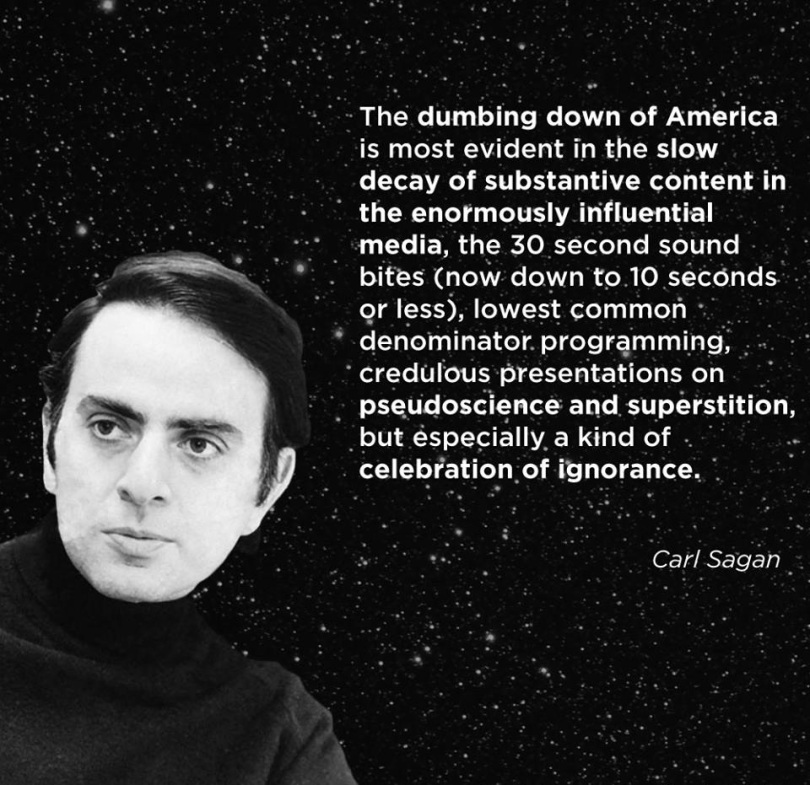 Something quite paradoxical is happening right now, during the Age of the Internet—an unprecedented time in our history which can be roughly compared to the invention of writing, more than 4,000 years ago, or the invention of the printing press, about 500 years ago—: people are getting dumber.

With more access to information, many of us would naturally believe that education should be more accessible. The fact is that yes, there is a lot more information out there, but much of it is analogous to the trans fats that we may find in junk food.

Social media is one of the mayor enablers of this pervasive diet of misinformation; and conventional media—newspaper, radio, TV, etc.—are desperately trying to get our attention with this brand of “knowledge” trying to pass as science. A positive feedback loop of misleading ideas dressed as ‘facts’ invade our senses from a lot more outlets than ever before.

What I’m referring to is what has been labeled as pseudoscience (pseudo = false): Astrology instead of Astronomy; Alchemy instead of Chemistry; Conspiracy Theories (of the Illuminati kind) instead of geopolitics.

This blog post will account for mayor conspiracies, factoids, pseudoscience detritus, etc., that get a lot of exposure in our contemporary media outlets. Take this post as a survival kit for the vast media wilderness that predatorily hungers for our attention. Links to the bogus factoids, as well as the actual, contradicting fact, will be posted along with each item of this list; the actual facts that aim to correct our misconceptions are known as debunkery. If any of you find another pseudo-scientific factoid, conspiracy theory, etc., be sure to write them in the comment section.

For each natural science there is a vast amount of pseudoscience examples out there. The most controversial ones have a lot to do with astronomy. Here are just 3 of them: Together Akhenaten and Nefertiti transformed the religious practices of ancient Egyptian society.

Thanks to the History Channel, this “hypothesis” has convinced a lot of people that aliens, instead of North Africans, were responsible for structures like the tombs we know as the Great Pyramids of Egypt. In fact, some ancient astronaut proponents are sure that Nefertiti, an Ancient Egyptian queen, was an alien.

Small part of the Cydonia region, taken by the Viking 1 orbiter and released by NASA/JPL on July 25, 1976 Richard C. Hoagland is responsible for this notorious nugget of pseudoscientific detritus

“His writings claim that advanced civilizations exist or once existed on the Moon, Mars and on some of the moons of Jupiter and Saturn, and that NASA and the United States government have conspired to keep these facts secret. He has advocated his ideas in two published books, videos, lectures, interviews, and press conferences. His views have never been published in peer-reviewed journals. Hoagland has no university degree”– Via Wikipedia (Emphasis with bold letters is mine)

Debunkery: One word should be enough to debunk this outrageous and many other pseudoscientific claims, credulity, what people want to believe with little or no evidence.

Pareidolia is a psychological phenomenon involving vague and random stimulus—image or sound—being perceived as significant. In other words, we see what we want to see. The large image on the left is a more recent one than the one at the bottom, taken in the late 70’s. The best cure to ‘pareidolia’ is high-def.

In the previous video, we see astronaut Buzz Aldrin—the second man to step on the Moon—knocking the daylight out of a conspiracy theorist that called him, among other things, a coward. I do not support violence in any shape or form, but this video shows how ugly things have gotten when it comes to the outrageous claims that many credulous people want to believe.

Debunkery: With modern computing and graphics technology, computer scientists and designers have been able to recreate the lighting conditions of the lunar surface during the moon landing. Many conspiracy theories trying to pass as science revolve around light: reflections, shadows, lack of stars, etc.. These are designed to cast doubt, and claim that the moon landing was staged in a studio. The following video—a very recent one—debunks the studio claim of the moon landing with the latest graphic accelerators, used in films like Gravity and computer video games:

Another gem of debunkery is brought to us by theoretical physicist, Michio Kaku. In this podcast recording, the scientist classily debunks the major conspiracy theories put forth by a podcast listener:

Unfortunately, there are many more out there. They are very easy to find; and every year a new one appears. In many cases, centuries old pseudoscience digs its way out of the rubble of history to pollute the Facebook walls of millions. Mermaids, round earth deniers, “anti-vaxxers“, phrenology, astrology, etc., are among the most common—and in many cases—most ancient pseudoscientific claims that still claw their way into our ideological frameworks.

The following excerpt should further equip you to distinguish between science and pseudoscience.

Paul R. Thagard used astrology as a case study to distinguish science from pseudoscience and proposed principles and criteria to delineate them. First, astrology has not progressed in that it has not been updated nor added any explanatory power since Ptolemy. Second, it has ignored outstanding problems such as the precession of equinoxes in astronomy. Third, alternative theories of personality and behavior have grown progressively to encompass explanations of phenomena which astrology statically attributes to heavenly forces. Fourth, astrologers have remained uninterested in furthering the theory to deal with outstanding problems or in critically evaluating the theory in relation to other theories. Thagard intended this criterion to be extended to areas other than astrology. He believed it would delineate as pseudoscientific such practices as witchcraft and pyramidology, while leaving physics, chemistry and biology in the realm of science. Biorhythms, which like astrology relied uncritically on birth dates, did not meet the criterion of pseudoscience at the time because there were no alternative explanations for the same observations. The use of this criterion has the consequence that a theory can at one time be scientific and at another pseudoscientific.

Make your own judgements about each factoid exposed here. I encourage you to do additional research on the subject.