The following post was written and designed by the students of Cupeyville’s Science Club.

The Virunga National Park in the Democratic Republic of Congo is an amazing place, one of the greatest nature reserves in Africa. It spans over plains and mountains where elephants, buffaloes, mountain gorillas and giraffes roam.  Unfortunately, over the past few years, political unrest has threatened the natural treasure that is Virunga.

Throughout most of the 19th century and until 1960, Congo was under the colonial rule of Belgium. The nation was raped of its natural resources, its government completely controlled by foreign interests, the people lacked any power over their nation. Even after independence was achieved.

The rape and plunder of Congo under his ancestor, Leopold II, remains one of history’s greatest crimes. Last week’s milestone reignited debate over the legacy of colonialism in Africa and whether, even half a century later, all the continent’s ills can still be hung around its neck. Under Leopold’s brutal regime, as many as 10 million were killed, according to some estimates. An outcry over the mass slaughter forced him to surrender the country in 1908 to the Belgian government.[1] 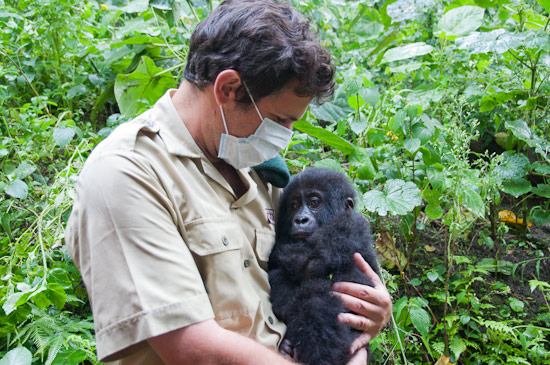 Here we can see de Merode taking care of a baby gorilla.

M23 Rebels are part of the oppressive forces that want to take control of the park for money.

Poachers and rebel military groups often enter the park and illegally kill animals for the black market. We see the struggle to protect the park from these threats through the eyes of Emmanuel de Merode, the park director, under his command hundreds of park rangers patrol Virunga in search of poachers and war criminals. Mountain gorillas suffer most from this threat as they are vulnerable and critically endangered species. Animal caretaker, Andre Bauma, shows the kind nature of mountain gorillas and the views of the local people of Congo. In 2007, illegal loggers massacred a group of gorillas, it was a heavy blow to the park’s protection program, there Andre Bauma rescued infant gorillas that had been left orphaned. These infants were taken to the gorilla orphanage where Bauma is the head caretaker, the gorillas see him as their mother, while they play with him we see they are social animals, capable of feeling the same emotions as humans.

The bounty of Virunga is not limited to biodiversity, there are resources such as fossil fuels that have attracted the attention of big oil companies that wish to mine inside park boundaries. This is the case of Soco, a British oil company that wishes to drill on Lake Edward, located inside Virunga, for oil. The Congolese government allowed Soco to drill on a portion of the park in violation of international conservation laws. The lake is the source of subsistence for the people living on its shores, oil drilling would certainly affect them, however Soco hides this fact through deceit and the promise of money.

The film shows the efforts of brave people working to save the park, Park director Merode and head ranger Rodrigue Katembo work against Soco by exposing their actions and keep corruption away from the park, oftentimes they have to refuse bribes from Soco supporters.

Investigative journalist Melanie Gouby is covering the situation inside Virunga, to get inside information she begins befriending key Soco employees, using a hidden camera and microphone she records them, obtaining valuable information.

Soco is not Virunga’s only threat, M23 rebels are at war with the government and are advancing towards Virunga, the local inhabitants and rangers plunge into immediate danger, stability in the region is threatened. Rangers have to act fast, evacuating people from villages and taking defense positions.

This film spreads awareness about an incredible place and the brave people fighting to defend it from danger. Despite so many threats, Virunga continues to be an amazing place, with the help of people around the world, it will be for a long time.

11 thoughts on “The Struggle for Virunga: a review”