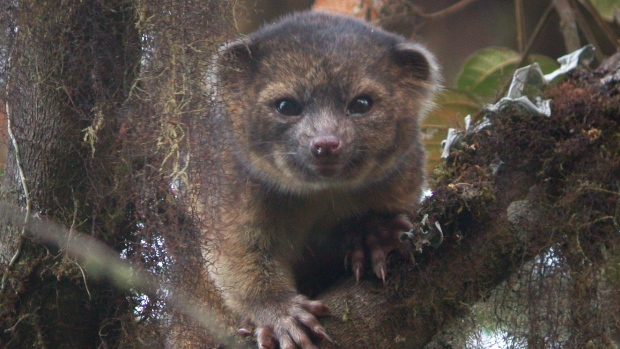 The discovery of a new mammal is a rare and exciting event in Biology.

This racoon-like mammal–the first carnivore to be discovered in the last 35 years–was discovered not in the wild, but thanks to a collection of  South American racoon specimens that is available at the Smithsonian.

“D.C., Kristofer Helgen, curator of mammals at the Smithsonian National Museum of Natural History, presented anatomical and DNA evidence that establish the olinguito (pronounced oh-lin-GHEE-toe) as a living species distinct from other known olingos.”

“Though Helgen has uncovered dozens of unknown mammal species during previous expeditions, in this case, he did not set out to find a new species. Rather, he sought to fully describe the known olingos. But when he began his study in 2003, examining preserved museum specimens, he realized how little scientists knew about olingo diversity. “At the Chicago Field Museum, I pulled out a drawer, and there were these stunning, reddish-brown long-furred skins,” he said. “They stopped me in my tracks—they weren’t like any olingo that had been seen or described anywhere.” The known species of olingo have short, gray fur. Analyzing the teeth and general anatomy of the associated skulls further hinted that the samples might represent a new species. Helgen continued his project with a new goal: Meticulously cataloguing and examining the world’s olingo specimens to determine whether samples from a different species might be hidden among them.”–Via The Smithsonian.com.

46 thoughts on “The Olinguito: A New Species of Mammal is Unveiled.”