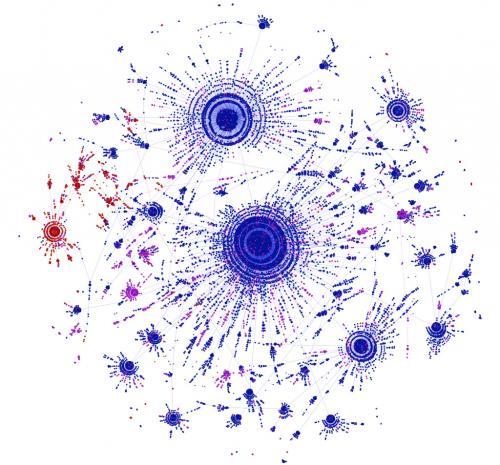 “A diagram showing the spread of the “No one should” meme on Facebook. Each node represents a different version, and each edge connects a version to the most likely ancestor variant. Nodes are colored by timing prompt: rest of the day (blue), next 24 hours (red), or other (purple), showing that mutations in the timing prompt are preserved along the branches of the tree. Credit: Lada Adamic.”–Via physorg.com

we are the universe aware of itself.

The patterns that resemble networks in our brains–galaxies are organized, as long as they are close enough, as networks; neurons are organized in networks; the Internet is one huge network–, are a big part of what makes us human. If we want to get a better grasp on what makes us human, to account for the relationship we have with the current technological context is a good way to start. Thus, nowadays, subjects as neuroscience, information theory, and consciousness research (a very tricky subject), are powerful tools when dealing with questions that have been with us for millennia…

How is humanity dealing with these questions in the 21st Century?

If you thought about heredity and the Internet as possible approaches to these questions, you are correct. Genetics and information theory (via biotechnology and infographics) can be put to use in interesting and interdisciplinary ways. Richard Dawkins–biologist–came up with the idea that cultural units (music, art, words, etc.) behave in ways that resemble genetic variation:

“Dawkins made his own jump from the evolution of genes to the evolution of ideas. For him the starring role belongs to the replicator (a DNA molecule, human consciousness), and it scarcely matters whether replicators were made of nucleic acid. His rule is “All life evolves by the differential survival of replicating entities.” Wherever there is life, there must be replicators. Perhaps on other worlds replicators could arise in a silicon-based chemistry—or in no chemistry at all.

What would it mean for a replicator to exist without chemistry? “I think that a new kind of replicator has recently emerged on this very planet,” Dawkins proclaimed near the end of his first book, The Selfish Gene, in 1976. “It is staring us in the face. It is still in its infancy, still drifting clumsily about in its primeval soup, but already it is achieving evolutionary change at a rate that leaves the old gene panting far behind.” That “soup” is human culture; the vector of transmission is language, and the spawning ground is the brain.

For this bodiless replicator itself, Dawkins proposed a name. He called it the meme, and it became his most memorable invention, far more influential than his selfish genes or his later proselytizing against religiosity. Memes propagate themselves in the meme pool by leaping from brain to brain via a process which, in the broad sense, can be called imitation,” he wrote. They compete with one another for limited resources: brain time or bandwidth. They compete most of all for attention.”

Mutations are a common occurrence in both scenarios: the digital and the organic (for more information on what memes are, you can click here). The following quote, taken from the article Facebook memes can evolve like genes, gives us some insight into what parallels are drawn between genes and memes:

“In many ways memes shape the culture and communities through which they move,” said Eytan Adar, an assistant professor in the U-M School of Information and the Department of Electrical Engineering and Computer Science. “The thing we really wanted to understand was how the cultures shaped the memes. This work has implications for understanding how people communicate and influence each other, and let’s us measure people’s beliefs, desires, values, and even what entertains and amuses them.”

Tools like the Yule-Simon distribution were used in this interdisciplinary research. Knowing this, do you think that concepts discussed in class, such as allele, mutation, selection, etc., are applicable to their findings? What examples taken from the article could you give that resemble concepts related to genetics and evolution?*

55 thoughts on “Memes as Genes, Genes as Memes: a Strange Loop of Information”