We’ve seen two of the most important forces that make it possible for us to consider words such as ‘reality’, ‘matter’, ‘universe’, etc. These forces are magnetism and gravity. Gravity is responsible for the elliptical orbits of planets; their shapes–’round’–are a result of this. Magnetism, which we’ve discussed with hands on activities using ferromagnetic fluids, is responsible for much of matter’s integrity. Both forces account for interactions between all kinds of hierarchies of matter: from atom to atom interactions; to the relationships that exist between galaxies.

The  following post is a gallery of pictures taken from the web. Most images are very recent, not older than a few weeks in many cases. There’s a unifying theme between all of them: Cosmology, the study of the Cosmos. Think about this word, ‘cosmos’, while we go over these images. Think about the forces that allow for the cosmos to happen; and keep in mind that we, human beings, are part of the cosmos.

Images will be captioned; but I encourage you to do research on them. 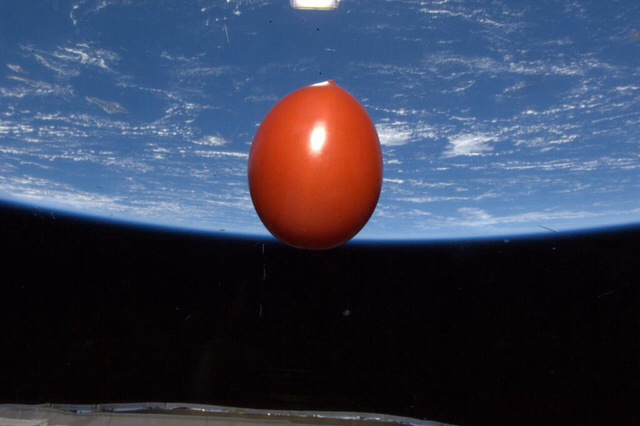 This is a tomato orbiting Earth: “It’s a snap from Japanese astronaut Koichi Wakata aboard the International Space Station. He tweeted the photo writing: “One fresh tomato for dinner makes us happy in space. It came up with us on Soyuz TMA-11M.”

This picture of the phenomenon known as Northern Lights, which has a lot to do with magnetism, was taken by Puerto Rican astronaut, Joseph M. Acaba.

This image of our star was taken a few days ago.

This one was taken by the Cassini probe before leaving our solar system behind. Can you see Earth?

Another glorious view of Saturn delivered by Cassini. The sun is reflecting against its rings, made from the debris of an ancient moon.

Speaking of moons, this one is Io, one of Jupiter’s moons, spewing an 80 mile high plume of water ice and sulfur dioxide.

This an infographic of a neutron star, compared to the size of Brooklyn, NY. 300, 000 Earths can fit in its volume.

Neutron stars are old and dense, but there’s always an origin story. And stars have its origins in Stellar Nurseries such as this one.

This is the Horsehead Nebula: “The red or pinkish glow originates from hydrogen gas predominantly behind the nebula, ionized by the nearby bright star Sigma Orionis.” 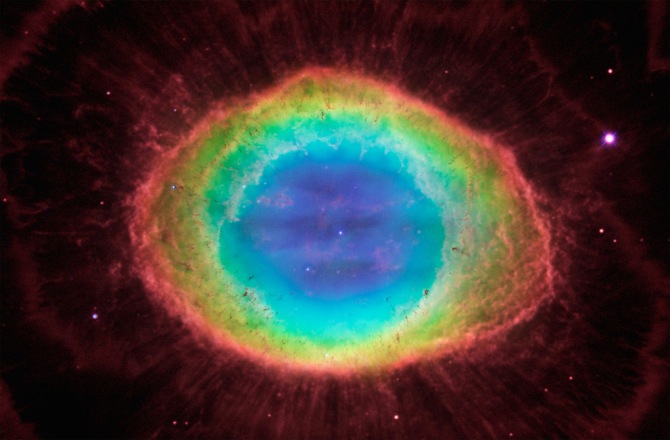 Another Nebula: “The Ring Nebula is a planetary nebula in the northern constellation of Lyra. Such objects are formed when a shell of ionized gas is expelled into the surrounding interstellar medium by a red giant star, which was passing through the last stage in its evolution before becoming a white dwarf.”

The cosmos dynamic and, in many cases, violent. This image of Arp 142 shows a collision between galaxies. The culprit: gravity.

The Butterfly Nebula (also known as NGC 6302): “The structure in the nebula is among the most complex ever observed in planetary nebulae. The spectrum of NGC 6302 shows that its central star is one of the hottest stars in the galaxy, with a surface temperature in excess of 200,000 K, implying that the star from which it formed must have been very large.”

There are many more amazing pictures of the cosmos (here, here, and here).

After watching these images, think about the following quote, attributed to Carl Sagan:

“The nitrogen in our DNA, the calcium in our teeth, the iron in our blood, the carbon in our apple pies were made in the interiors of collapsing stars. We are made of starstuff.”

Now that you’ve watched the images, and discussed Sagan’s quote: can you build a narrative from the images in this post? If so, how can this narrative be considered cosmology?