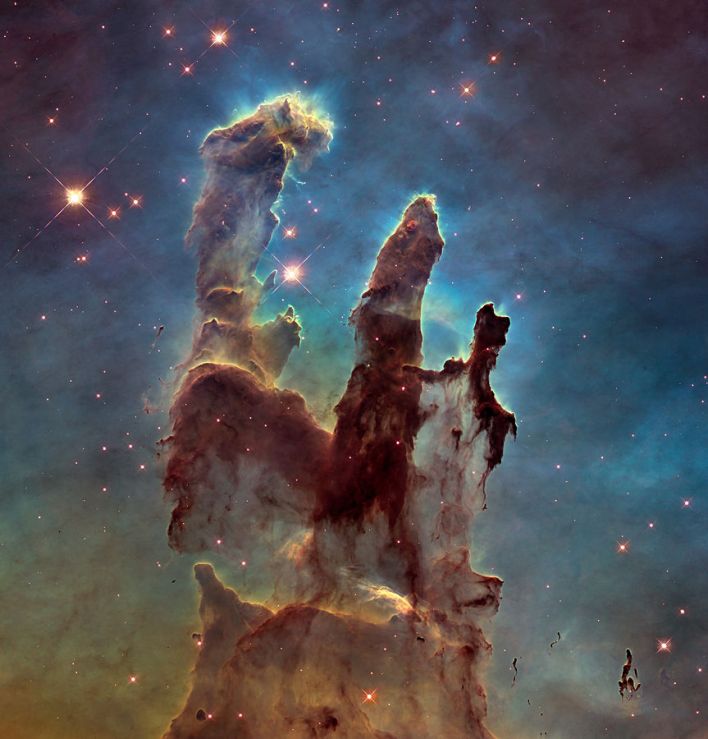 “The pillars are composed of cool molecular hydrogen and dust that are being eroded by photoevaporation from the ultraviolet light of relatively close and hot stars. The leftmost pillar is about 4 light years in length. The finger-like protrusions at the top of the clouds are larger than our solar system, and are made visible by the shadows of Evaporating Gaseous Globules (EGGs), which shields the gas behind them from intense UV flux EGGs are themselves incubators of new stars“

They were discovered in 1995. The image is a composite made by the Hubble Telescope. These clouds–made out of oxygen, hydrogen, and sulfur, elements found in our own bodies–are very, very far away–6,500 light years away. This means that what Hubble captured 20 years ago was a snapshot of an object that no longer exists:

“Images taken with the Spitzer Space Telescope uncovered a cloud of hot dust in the vicinity of the Pillars of Creation that one group interpreted to be a shock wave produced by a supernova. The appearance of the cloud suggests a supernova would have destroyed it 6000 years ago. Given the distance of roughly 7000 light years to the Pillars of Creation, this would mean that they have actually already been destroyed, but because of the finite speed of light, this destruction is not yet visible on Earth, but should be visible in about 1000 years. However, this interpretation of the hot dust has been disputed by an astronomer uninvolved in the Spitzer observations, who argues that a supernova should have resulted in stronger radio and x-ray radiation than has been observed, and that winds from massive stars could instead have heated the dust. If this is the case, the Pillars of Creation will undergo a more gradual erosion.” Via.

31 thoughts on “The Sky is a Time Machine”