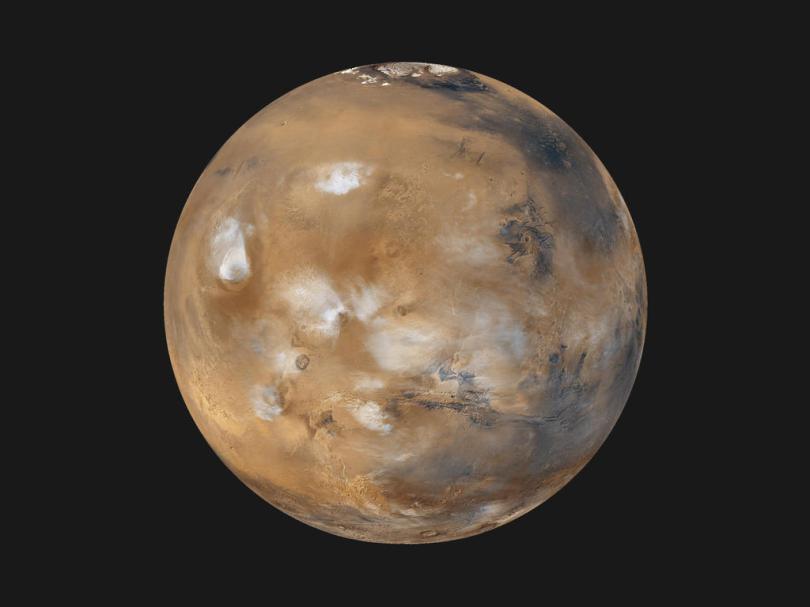 “Twelve orbits a day provide the Mars Global Surveyor MOC wide angle cameras a global “snapshot” of weather patterns across the planet. Here, bluish-white water ice clouds hang above the Tharsis volcanoes. This computer generated image was created by wrapping the global map found at PIA02066 onto a sphere.”–Via NASA

“2015” will appear on every mayor textbook as a significant year for scientific achievement. On October 5th, 2015 it was announced that there is unambiguous proof that brine (water with a lot of salt) flows on the martian surface during its warm months:

From the press conference that NASA gave a few days ago:

The dark, narrow streaks flowing downhill on Mars at sites such as this portion of Horowitz Crater are inferred to be formed by seasonal flow of water on modern-day Mars. The streaks are roughly the length of a football field.

These dark features on the slopes are called “recurring slope lineae” or RSL. Planetary scientists using observations with the Compact Reconnaissance Imaging Spectrometer on the same orbiter detected hydrated salts on these slopes at Horowitz Crater, corroborating the hypothesis that the streaks are formed by briny liquid water.

What does this mean for life? Does this discovery boosts expectations for martian life? Should we go up there? If so, what measures do we have to take once we reach these salty slopes?

69 thoughts on “Liquid Water on Mars”